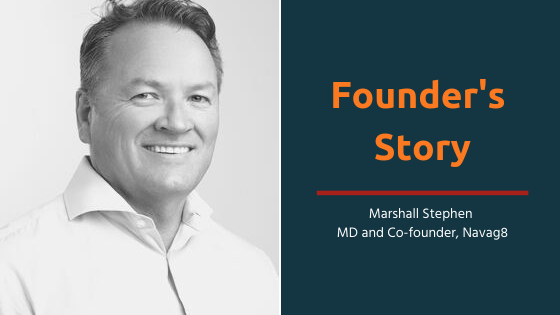 Managing Director and Co-founder of Navag8

Behind every idea is a founder, or in this case, two. Managing Director and co-founder of Navag8, Marshall Stephen, founded a successful start-up before that was a term. He has been working in finance, technology and business for more than 30 years and doing it successfully. He is a Scotsman who loves a whiskey, a Geelong local and footy supporter, self-confessed kickboxing nut, keen snowboarder and says his strength has always been ‘finding the gaps in the market’.

“I kind of fell into it IT and FinTech by accident. My brother showed me The Age newspaper back in year eleven when all the jobs were in computers so I did a Bachelor of Science in IT. When I was just out of uni, it was the recession, interest rates were at 17% so it was a crazy time to be in financial services.

My first job was in a software house based in Western Australia.  I worked as a trainee for eighteen months on a National Mutual Trustees’ trust system and when the senior analyst and state manager left, I found myself managing the work and the people. When National Mutual offered me the management role, I was young and confident and said yes.

Sometimes from the biggest failures come the biggest successes. The early ’80s and ’90s was a time when financial services really started going digital but didn’t necessarily do it right. I happened to be around when a $900million dollar digital migration failed and was only called in when everyone was in crisis mode. I spent fifty hours straight in front of a computer with the business manager and we fixed it.

This led to an offer three months later by National Mutual who wanted to start a wrap account and asked me to manage it. I and three other people started Summit Master Trust and we grew it to a business of about $3billion in seven years.

The success of Summit opened a lot of doors, so at the age of twenty-seven, I became the CIO of IOOF and went through a public listing. My father used to say “the harder you work, the luckier you get”, so I was fortunate to get asked to work on that migration issue because I put in the hours and built relationships, and that gave me a lot of skills like marketing, sales, business development, distribution and dealing with service providers. It helped me get where I am today.

Post IOOF, I ended up at Harvey Norman buying businesses in Australia and overseas but with an IT/Operations bent and my last corporate gig was CIO for MLC at Nab Wealth. I oversaw more than two thousand staff and budgets of $500 million per year, so it was a great experience and I met some of the team members I still work with today. But with executive level management comes politics and a slow innovation curve.

I felt a little stifled and wanted something else, and a chance encounter with Richard Dalenberg changed my trajectory again. Richard was working at Aviva as the Chief Architect of their platform provider, Blue Door, and was keen to take a new direction too.

At the end of 2014/15, Richard and I locked ourselves in a room and built Capital Road, which is one of the most advanced wealth management platforms in Australia that sits entirely in the cloud, is API enabled, white-label and fits any tax structure. My specialty has always been finding gaps in the market and Richard is a bit of a genius, so we saw opportunities and built the products. That’s when we convinced Dean Lupton to come and join us from his corporate gig.

Navag8 was borne out of Dean and I seeing the lack of engagement that the big financial service providers have with their clients. Dean is the Co-founder and Product Director for Navag8, all of our team, have worked in financial service companies for years and know their products, systems, regulations and the shortcomings.

We dealt with a lot of super funds and banks who don’t know who their clients are and don’t feel the need to because balance sheets are big enough that they will be successful whether their clients are happy or not. So they end up with $7billion dollar profits and a terrible customer satisfaction rating.

Navag8 is a financial engagement tool but also helps educate people about superannuation and personal finance management. Getting engaged at fifty-five is too late. It’s the same when people start buying their first house at thirty-five, they have missed a lot of savings capacity for the previous fifteen years, so Navag8 is about getting people focused on their financial security, superannuation and other meaningful life events like family or education.

From a B2B perspective, we know the internal issues facing banks and super funds. We know there is a ‘build it yourself’ mentality in Australia instead of engaging specialists with a single focus, who can help their clients. This means a fairly consistent launch of sub-standard products flooding the market. Navag8 can help these organizations connect with their clients in a way that offers value but also meaning, so people can understand their own finances and feel they are being looked after – by the people looking after their money.

Capital Road was self-funded but Navag8 is entirely funded by a VC who believes in what we are doing and trusts us. Getting the first million for your startup is one of the hardest things you can do because it’s the highest risk stage of the business, so to be successful, you need to really love what you do, trust your gut, work hard and surround yourself with great people. Remember that if it was easy, everyone would do it”.